This is probably one of the posts I’d like to have translated into Spanish because I am so grateful for the experience.

I joined Clevernet in January, 2005. For the first 9 months, Uli and I basically worked as independed consultants helping each other out with proposals, but billing independently.

About 9 months later (September, 2005), I wrote a business “vision” document (PDF, 88 KB) to try and provide us with some guidance and direction as a team rather than just thrashing about trying to keep our heads above water and not really getting anywhere. Yes, we’re posting something many companies would consider sacred. We don’t believe it contains much more than common sense, though, so I don’t believe we’re giving away the farm by doing this.

In December, 2005 (one year ago) I saw an ad on TV for something called Gran Canaria Emprende. It’s a free training program for entrepeneurs. In fact, it’s better than free: at least one of the participants ends up 5,000€ richer and the rest at least 1,000 through government subsidies. Add to that the fact that you can learn as much as you want (for the following 2 years) and it seems like a bit of a dream come true.

Not much of a difference between “earn” and “learn” 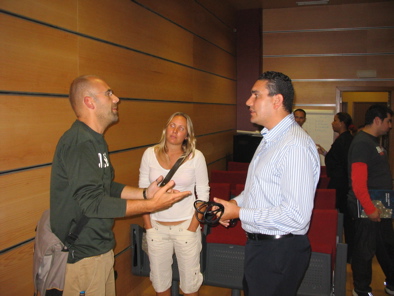 The program was run by a small team of specialists out of an office by the same name (Gran Canaria Emprende) and run by the Cabildo de Gran Canaria, a government office with jurisdiction over the island of Gran Canaria (the “Cabildo” corresponds approximately to a county government). Each island has its own Cabildo. 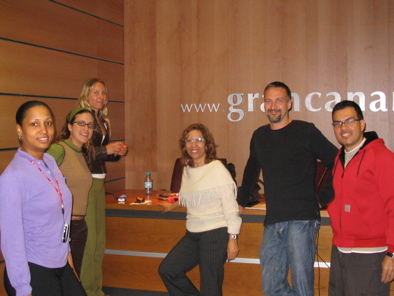 The program starts around the end of January and runs for about 4 months. It consists of about 9 hours of class per week plus 2 hours of private consultation. There are two “modules” to the program:

We signed up for the Consolidation module having incorporated just short of 2 years prior. Each week, roughly, we studied a different topic related to consolidating a business:

And the final paper was a Consolidation Plan (in Spanish, PDF 464 KB). Yes, we’re posting a mildly edited version of our consolidation plan. Please don’t laugh too hard.

At the end of the program, the consultants (the trainers) are all available for free consultation for the next two years. I even have their cell phone numbers. Wow! 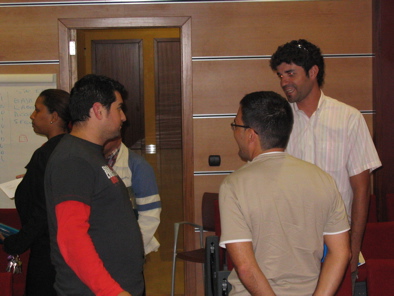 During the course there was one week where we didn’t have a class planned and we weren’t on vacation. I offered to give a talk on Search Engine Optimization. It met with some success. I was then asked to give the same talk at the Día del Emprendedor event organized by the Consejería de Economía y Hacienda del Gobierno de Canarias. That too appeared to be successful but I’m waiting for an opportunity to do it again. Any takers? 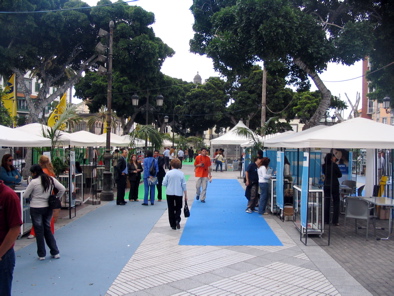 I was also fortunate enough to have been invited to a start-up mash-up held at the University of Las Palmas and organized by the Instituto Tecnológico de Canarias, S.A.. It was a good exercise, a bit like speed-dating for entrepreneurs, which forced me to “hone” my sales pitch (which is difficult when you don’t have a specific product you’re selling) but hasn’t, as yet, led to any sales. My (empty) chair is on the right-hand side of the picture, with my laptop open on the table. 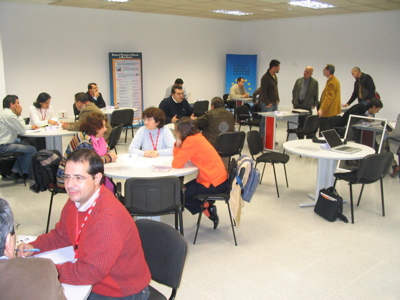 The end of an era

We’re now nearing the end of the execution of the consolidation plan. Things have definitely improved inside Clevernet. We have a clearer division of labor and some standard business processes are in place, but we’re struggling with the creation/sales and marketing of our products, and we also still struggle with time-management (we spend too much time talking things out rather than doing a quick analysis and drawing a conclusion, right or wrong).

In spite of the risk involved, we’ve decided to post the vision document, the consolidation plan, and a candid view inside the company for two reasons:

At present we have more work than we can do alone (so we’re doing something right) and are actively recuiting an experienced Web Developer (which would bring the total staff to 4 – 100% increase in just one year). However, the consulting business seems to max out at around 20 people and we’d like to turn the corner to selling products as soon as possible. Your input, especially if you’ve read the vision document and consolidation plan, may be very helpful.

A word about my business partner, Ulrich Schlegel

In closing, I’d like to point out that Uli is one of the best Windows Administrators that I’ve ever worked with, and I’ve worked with quite a few. I’m very confident in his abilities and if a team of technicians ever had a chance at success in this situation, it would have to be us.

Thank you for taking the time to read through this long post (and the documents) and we hope you find the information useful.

And thank you Spain (el Cabildo en particular) for giving us this opportunity to succeed!

My business partner, Ulrich Schlegel, is from Essen, Germany and when I joined the company in 2004, I was taking German at the State Language School of Spain. When practicing my German, I found myself saying “meine firma” quite frequently. Later on, when planning this blog, I thought that that might be a nice way to communicate the multi-cultural nature of running a company here in the Canary Islands (which has a fairly high number of foreigners, Germans in particular).

Having spent some time trying to protect web sites from unintended unlocked back doors, I found this article to be extremely interesting. I think that one of the conclusions is quite simply that there are an infinite number of ways to break in to web sites.

At Clevernet we set up a Google Custom Search Engine that only searches web sites run by the Spanish government. This can be very useful for finding “official” resources.

From time to time I’ll be posting pictures and experiences of my life here on the island. The goal is to give you a sense of what it is like to live here, nearly 100 miles of the coast of Africa.

Don Pedro and one of his daughters, Carmelina 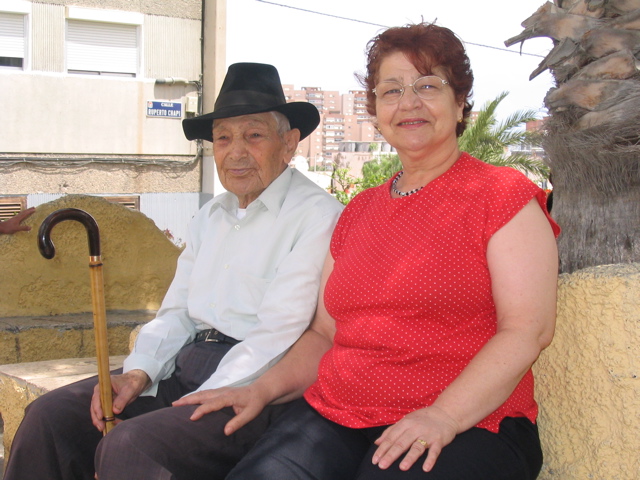 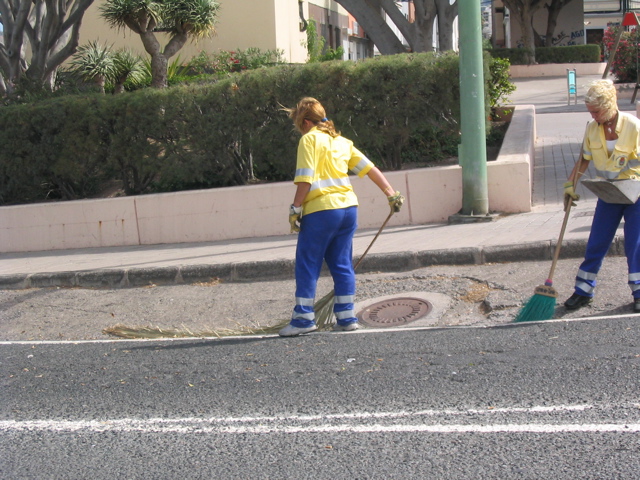 One thing I’ve learned living here is to be far more conservative than I’ve ever been living in the U.S. Living on an island you’re much more aware of acute shortages, or potential shortages, than living on the mainland. This causes people to be very pragmatic. In this picture the woman is using a palm leaf to sweep the ground. In my personal life I’ve learned to turn the water off in the shower while I soap up, turn off the lights if I am not using them at that very moment, buy just enough food for the foreseeable future (so it doesn’t go to waste), and more (but I can’t remember at this time).

Yes, I’m right next to Africa 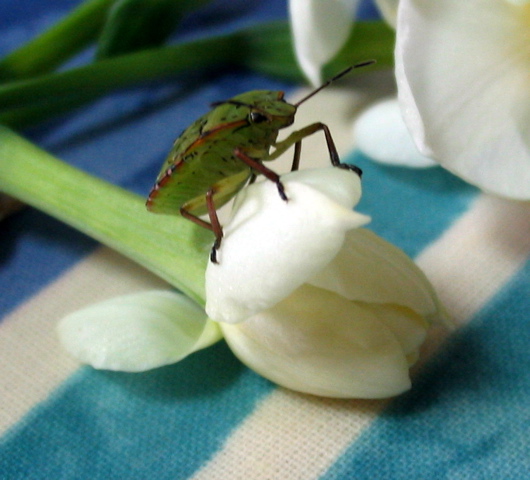 Having lunch at my in-laws one day we found this funny bug making a home on some flowers. I’ve seen bugs like this in magazines but never in person. He looks like a friendly fellow, but is clearly unlike anything I’ve ever seen in the U.S., which just reminds me the African continent is a mere 80 miles east. 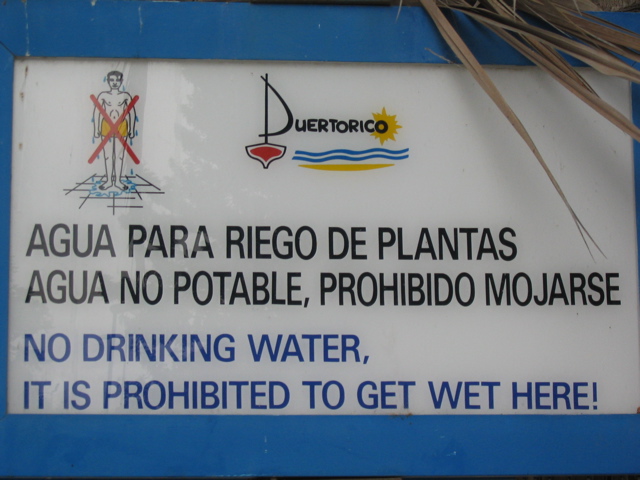 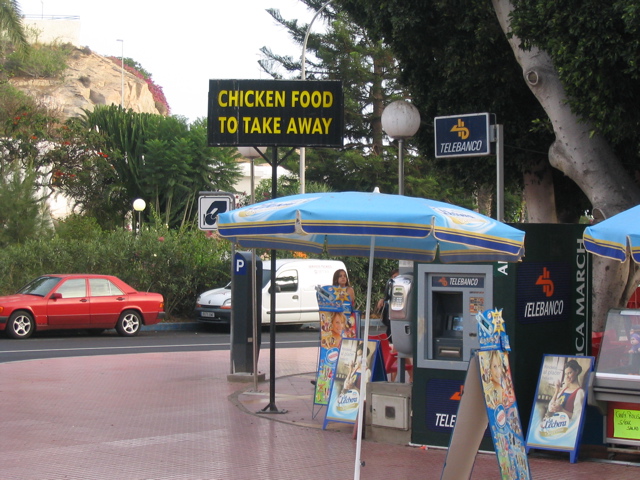 A huge part of the economy is English-speaking tourism. I choose to believe that these signs are tongue-in-cheek, but they may also be another sign of people with limited resources doing the best they can to get by. After all, I think any native speaker gets the intent of the message…

Breakfast for Lunch at Dinner 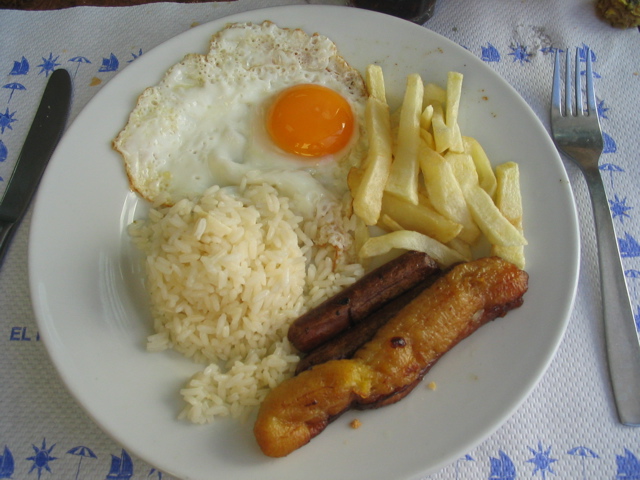 Bad Drivers 1: No Turn on Red

In Spain it is illegal to turn right on red. It is also illegal to stop inside an intersection. Need I say more? 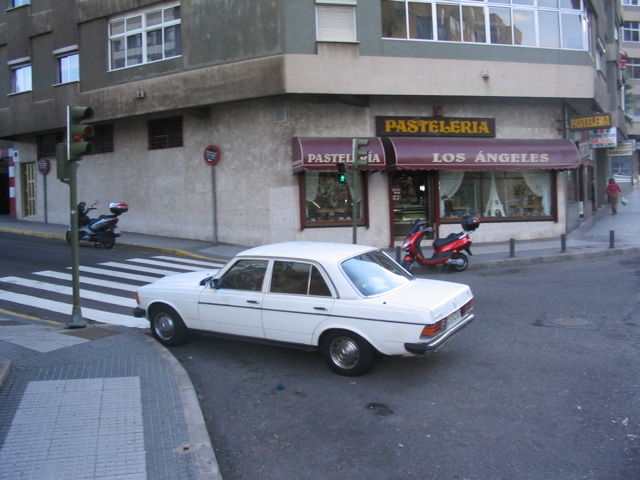 This driver is parked in the intersection (illegal), but at least he’s not in the crosswalk!

Because there is no accord between Spain and Illinois, it turns out that I have to get a driver’s license from scratch. For most Americans this won’t seem like a big deal, but here it is. It costs at least 0 dollars, requires passing an exam with 40 questions (you can only miss 4) and taking a driver’s test. It also requires getting a certificate of health from a doctor, and the test questions are really, really hard; nothing like what we have in the U.S.

This would lead one to believe that drivers here are extremely well qualified. Nevertheless, as these pictures show, this is not the case. Do I seem bitter? 😉