While living here I’ve had several opportunities to do home repair or participate in minor constructions jobs. The most recent task was repairing a trough that had developed on the roof of our building and that appeared to be allowing water to collect and filter through to my upstairs neighbor’s ceiling.

My neighbor was going to pour some cement into the trough (a depression in the roof about 2 meters in diameter) and paint over it, but I suggested that maybe we should go a little further. I hate doing things twice. My father was here visiting and what better way to spend your vacation than helping your son repair his roof? 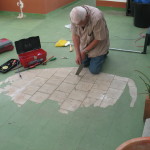 We started by cleaning the affected area,
removing the old paint and vacuming out the dust and other junk that had accumulated between the tiles over the years. 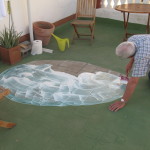 We then applied a “resin” (not sure of the chemical makeup) to help the cement stick and minimize leaking. When the resin dries, it leaves behind a sticky substance not unlike the glue on the back of some price tags (that is impossible to remove). 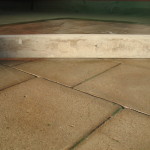 The hole we were trying to fill was about 1.5cm deep (about half an inch). Note that we only measured one dimension. More on why later… 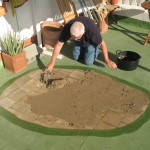 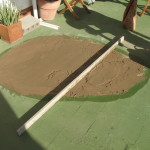 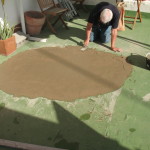 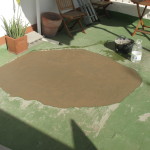 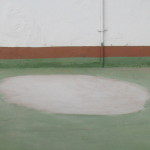 I had never poured cement before but my father had, so with his help, we managed to pour a fairly nice patch filling the hole. We used an entire 20 kilo bag of cement (well, 85% of the bag) and were very careful not to let the cement get too wet. The cement dried in a few hours (it was hot and sunny) but we dampened it to keep it from cracking and by the next day, it was ready to be painted. 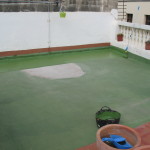 The paint, known as sealent here, seemed to be a “rubberized” acrylic paint with some insulating properties. It is a bit disturbing to think that this is the ONLY thing keeping water from penetrating the tiles, mortar, and cement below. Shouldn’t there be some sort of rubberized layer (at least 1/4 inch thick) glued to the surface with some petroleum based product? Apparently, this paint-only approach is standard here in the islands. 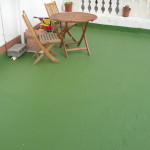 Two coats (and 24 hours) later, the job was done, and just in time too. It started to rain about 8 hours later. Unfortunately, for all of my good intentions, it looks like this work was mostly for naught. As I stated above, we only measured the depth to fill by one dimension. This is because the neighbor was convinced the water was leaking through where it was accumulating. 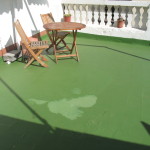 I, however, suspected that filling that one hole would simply push the water to other parts of the greater depression, which is in fact what happened. Thus, to really fix the problem, we’re probably going to have to fill nearly the entire roof with about 2cm of mortar.

This site uses Akismet to reduce spam. Learn how your comment data is processed.